From Bare Metal micro:bit
(Redirected from Appendix B)
Jump to navigation Jump to search

The experiments in this book assume that you are preparing programs for the micro:bit using a Raspberry Pi (version 3 or later), and the instructions given here are aimed at setting up the Pi with the software needed for that. The steps involve installing various software packages needed for programming the micro:bit, such as versions of the GNU C compiler and attendant programs that are capable of generating code for the ARM Cortex-M0 processor on the board. They also install a modified version of the Geany programming environment that is able to make sense of the syntax of ARM assembly language.

Using a Raspberry Pi is convenient as a way of getting a standardised Linux-based setup with minimal fuss. However, it is almost as easy to set up any other Linux machine in a similar way, and I did much of the development work for the book on an ordinary Intel-based laptop. For machines running Debian or a derivative, the same setup script described below will work just as well as on a Raspberry Pi. For other Linux distributions, similar steps will work if performed manually. It doesn't matter if the host machine is based on an Intel processor rather than an ARM processor, because it's not necessary for the host processor actually to run any of the code that is being compiled; even on the Raspberry Pi, the compiler we use is a cross-compiler, running on one machine and generating code for another. Although in that case, both machines are designed by ARM, the host runs native ARM code while the target machine runs Thumb code.

For some experiments, we will want to use the serial port on the Raspberry Pi to connect to the micro:bit. Luckily, the 3.3V signals on both boards are compatible. For these experiments, the serial port on the Pi should be enabled, but should not show a login prompt. To set this up, from the main menu choose Preferences>Raspberry Pi Configuration; in the dialog that appears, click on the Interfaces tab, choose Serial Port = enable and Serial Console = disable and click on OK. A pop-up will appear asking if you would you like to reboot: click Yes. 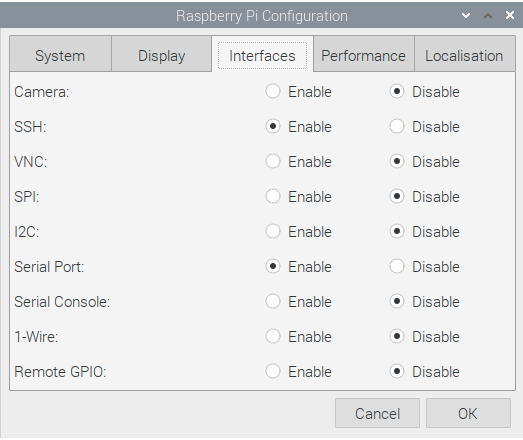 The instructions in this book assume you are using a Raspberry Pi to prepare programs for the micro:bit, but they can also be followed with little change on other platforms.