Obtuary from the Daily Telegraph:

John Simopoulos, who has died aged 91, was a founding Fellow, Tutor in Philosophy and long-serving Dean of Degrees of St Catherine’s College, Oxford; he was also the sort of old-school don whose manifold eccentricities live long in the student memory.

Simopoulos was a member of a remarkable generation of Oxford philosophers, including Freddie Ayer, David Pears, Iris Murdoch, Mary Warnock, Peter Strawson and Tony Quinton, who came to dominate their field in the post-war era. Unlike them, however, he published very little. Indeed, he was perhaps best known for two publications, both outside his subject: an article, "Tetracycline treatment for non-specific urethritis", published in 1977 in the British Journal of Venereal Diseases (a colleague received a copy with the inscription “Multiplex erit scientia” – “knowledge shall be diverse”), and a privately published collection of dirty limericks.

As Simopoulos once confessed to a fellow guest at a dinner party given by his great friends, John Bayley and Iris Murdoch (who dedicated her novel, The Bell, to Simopoulos): “I used to review for an important journal… but it packed up 20 years ago.”

Simopoulos was one of four permanent academic staff at the St Catherine’s Society when it was founded in 1952, and in 1960 became a founding Fellow when it was transformed into a college. A staunch college man, he promoted reading parties to counterbalance the hearty rugger ethos that St Catz had when it was still an all-male establishment. A bi-annual dinner was founded in his honour, designed to get undergraduates and academics chatting to each other across disciplinary boundaries. Over fine food and wine, students of all subjects were commingled, with some tutors invited to give a brief, preferably funny, talk relevant to their field, but accessible to everyone.

Simopoulos, whose father had served as the Greek ambassador to the Court of St James during the Second World War, loved ceremonial. He also became celebrated as the college’s Dean of Degrees. (Deans of Degrees are Fellows who prepare and present the students from each college for matriculation and degree ceremonies.) Even after his retirement in 1988, he took great pride in guiding scores of students through matriculation in the Sheldonian each Michaelmas term, as well as taking responsibility for presenting graduands at 10 degree ceremonies per year.

One former undergraduate recalled that at such occasions he was “word-perfect, or if ever less than word perfect, would correct himself in perfect Latin”. To his charges he would always emphasise the central importance of the oath which each student is asked to swear. The current Master of the College, Professor Roger Ainsworth, was quoted in the Oxford Mail as saying: “He would tell graduands: 'If you walk around Oxford, half the population will be shuffling around the pavements looking depressed. This is because they did not say: “Do fidem” [I swear] loudly enough.’ ”

Simopoulos did not always see eye to eye with the college’s founding Master, the historian Alan Bullock – as became apparent in 1993 when the college buildings, designed by the Danish architect Arne Jacobsen, were listed Grade I by Peter Brooke, the heritage secretary, and Simopoulos dismissed this decision as a “nonsense”. Neither he nor other college Fellows had been consulted about the design, he protested: “Alan and his pals junketed off to Denmark for weeks and came back with this miserable Dane. Jacobsen was gloomy as hell, a symphony by Sibelius brought more or less to life… Everyone licked Alan’s arse at the time. He was very impressed by Jacobsen, even let him design the ghastly cutlery in hall. When Alan showed the Fellows the new knives and forks, they 'oohed’ and 'aahed’; I said I thought they looked like a DIY abortion kit designed by Charles Addams.” 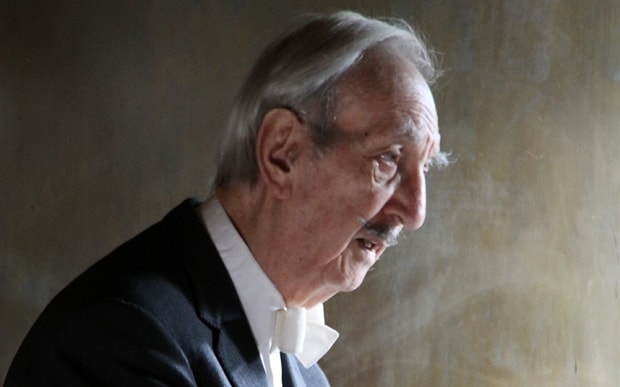 John Simopoulos was born on June 12 1923, when his father, Charalambos Simopoulos, was serving as High Commissioner for Greece in Constantinople. Educated at Stowe, he read Greats at Magdalen College, Oxford. For a time he taught Latin at Christ Church Cathedral Choir School before being appointed Tutor in Philosophy at what was then the St Catherine’s Society in 1953.

He spoke fluent Italian (and Latin) and, in the early 1950s, also worked as a special commissioner for Oxfam, reporting on the plight of Hungarian refugees in refugee camps in Italy.

In the little he did write, Simopoulos’s love for linguistic precision was always evident – even in his collection of limericks. One of his favourites ran: “There once was a fellow called Rex, / Who’d a diminutive organ of sex. / When had up for exposure, / He replied with composure, / De minimis non curat lex ['the law does not concern itself with trifles’].”

His attention to terminological and grammatical detail was unremitting. A colleague recalled his riposte to an English tutor who accused him of being a pedant: “At least I use the language with sufficient precision for you to say that of me, which I doubt is true in your case.”

Despite his friendship with Bayley and Iris Murdoch (whom he introduced to the Tintin books) Simopoulos loved good food (and wine). The Bayleys were not known for their fine cuisine, though it was observed that Simopoulos was “his own barometer” in such matters, “good” denoting what he liked and “bad” what he did not.

This applied to other areas of life too. Thus, he was heard to remark of an acquaintance of whose chosen profession he disapproved: “In a profession which has no standards, he somehow contrives to fall below them.”

One of Simopoulos’s quirks was a fascination with telephone technology. He would spend his long vacations working in the Rome telephone exchange and, as one colleague has recalled, at a time when the Post Office ran the British telephone system and the unions ran the Post Office, Simopoulos could somehow rig up a phone in a colleague’s room without having to negotiate the months-long Post Office waiting list. How he did so remained a mystery, but he liked it that way.

In retirement Simopoulos, who had a flat in London as well as one in college, indulged his lifelong fascination with the technology and became a telephone consultant in London.