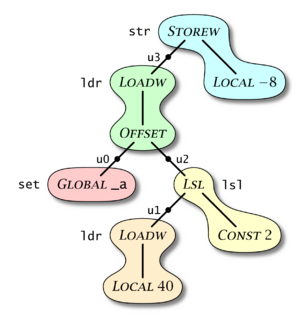 This course will show you one way to build a compiler for an ordinary programming language (like Pascal or C) that generates reasonably good code for a modern machine (the ARM). To make the task manageable, we will write the compiler in a functional style in quite a high-level language (OCaml), and we will use power tools (Lex and Yacc) to automate the easy part – analysing the syntax of the input language. The designs we create can also be used to implement hand-crafted compilers without the benefit of these power tools.

Our compiler will be organised for clarity, being structured as the functional composition of many small passes, each carrying out one part of the compiling task. This organisation allows us to focus on the representations of the program being compiled that are handed from one pass to the next, understanding each pass in terms of the transformation it must achieve. The course doesn't aim to be a survey of all the ways the task might be done, though occasionally we will pause to mention other choices we might have made. Because we will be building a big-ish program, we will naturally want to deploy some of the technical means to deal with large-scale software development: a version control system to keep track of the changes we make, automated building (using Make), and automated testing against a stored corpus of test cases.

To encourage participants to develop practical skills, and to give them an opportunity to demonstrate them, the course culminates in a practical assignment done over the Christmas vacation. Another page has a sample write-up, the assignments set in previous years, and Mike's solutions to each of them.