From Digital Systems
Jump to navigation Jump to search

Each lecture title is a link to notes for that lecture. The notes for some lectures have a section at the end for questions asked during or after that lecture by the audience this year or in previous years.

The first few lectures will be about programming a microprocessor in assembly language, including the detail of how each kind of instruction operates.

[1] Microcontrollers and embedded programming. Architecture of the micro:bit. Programmer's model. Execution of an instruction.

The next lectures are about different kinds of I/O interaction, including interrupts.

[11] The interrupt mechanism. What the hardware does with interrupts.

The last part of Hilary Term has lectures about using and then implementing a simple process scheduler, allowing asynchronous events to be handled in a manageable way.

[13] Device drivers. Server processes. Interrupts as messages from the hardware.

[16] A device driver. Writing a driver for a simple I/O device. 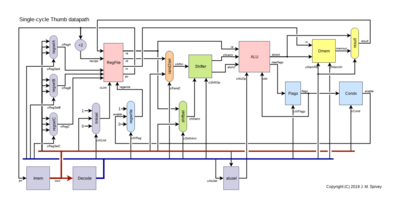 In the first part of Trinity Term, the lectures are about constructing logic gates from transistors, and then building those logic gates into modules we can later use to design a computer. Helpful reading for this part of the course is the appendix on Basics of Logic Design from the recommended book by Patterson and Hennessy.

[20] Example of a sequential circuit.

The second part of Trinity Term has lectures about using architectural modules to build a simplified implementation of the Thumb instruction set.